“I was flashing through everything I’d done in my life, health wise, because I never wanted to end up in [this] position, and yet here I was – in hospital, having a heart attack.”

It was Saturday of the Easter long weekend, and Greg, who was 52 at the time, was at the gym with his wife.

He was the fittest he’d ever been; working out nearly every day and doing two-hour karate sessions three times a week in preparation for the upcoming World Firefighter Games. He watched his diet, and knew his cholesterol and blood pressure were both very healthy. By all accounts, he was doing everything he could to be heart healthy.

Yet, that day in the gym, Greg had a sudden searing pain in his shoulder, and as it spread across his upper body, he knew he was having a heart attack – and a massive one at that.

Overcome by pain and feeling nauseous, Greg left the gym floor. “I went to the change room because I thought I was going to be sick, and the last person walked out, and I just had this sense that I was going to die in there alone, so I made it back out to reception, said ‘please call an ambulance’, and collapsed.”

Gym staff and his wife, a registered nurse, tried to keep him comfortable. But as a long-serving firefighter, Greg had attended his fair share of medical emergencies and knew there wasn’t a lot they could do until the ambulance arrived. Ironically, the first to arrive were local firefighters.

Greg was rushed to Royal North Shore Hospital and was quickly transferred to the catheter laboratory where interventional cardiologist, Professor Ravi Bhindi was waiting. Greg remembers Ravi’s exclamation, “Ah ha! There it is!” as they located the clot that was blocking his artery. When the stent was in place and the artery unblocked, Greg felt an immediate sense of relief. But his relief was later replaced by confusion and anger, as Greg struggled to come to terms with the fact he’d nearly lost his life due to a heart attack.

“How could it come to this? This shouldn’t be happening to someone like me.” 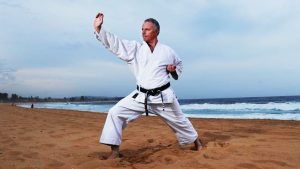 Greg was incredibly healthy at the time – he exercised regularly, had no family history of heart disease, followed a healthy diet, was not overweight, didn’t smoke or drink, and did not have high cholesterol or high blood pressure.

Professor Bhindi says “Whilst we have made big progress in identifying and treating the major modifiable risk factors for heart disease, there is still a lot to discover.  For example, we don’t know why someone like Greg and otherwise absolutely healthy individuals with excellent lifestyle choices, go on to have a heart attack as he did.”

As a practising doctor, and one of Heart Research Australia’s researchers, Professor Gemma Figtree was highly intrigued by these ‘surprise’ heart attacks.

“As interventional cardiologists we all remember the fit, young patients [like Greg] who come through the door and look up at you and say, ‘Why me, doc?’.” Professor Figtree explains.

Gemma and her team conducted a retrospective study of almost 700 patients who presented at Royal North Shore Hospital suffering a heart attack between January 2006 and December 2014, and found the rate of otherwise healthy patients having heart attacks had increased from 11% to an astounding 27%.

These heart attacks occurred across all age groups, and were just as deadly as those in people with traditional risk factors. The study’s finding challenges the common misconception that only old men, or people with ‘self-inflicted’ risk factors, have heart attacks, and really highlights that heart disease can affect us all.

Professor Figtree’s team are now undertaking a research project that aims to discover what is causing heart disease in these otherwise healthy individuals.

“Despite major advances in the understanding and treatment of heart disease, there is still a lot we don’t know. The fact more people with no traditional risk factors are having heart attacks shows there is still much for us to investigate and understand,” Gemma explains.

“The question is, how do we get better at predicting who is going to have a heart attack? How can we pick up the signs 20 years before they start causing issues? The aim of this project is to identify the development of plaque in the arteries much earlier, and like ‘catching’ a cancer early, this would enable us to protect people from the life-threatening consequences of heart disease.”

To conduct this study, the research team are analysing blood samples and de-identified data provided by consenting patients at Royal North Shore Hospital. To date, around 1,500 people have joined the study, and the aim is to recruit a total of 5,000 patients.

The research is following two approaches – the first is ‘unbiased’ and uses advances in genomics, and metabolomic (small molecule) markers and their association with disease susceptibility or resilience.  The second approach is ‘hypothesis driven’ and looks at the role inflammation and oxidative stress, as well as variations in the patient’s body and cells to defend against this.

Both approaches are investigating unexplained susceptibility and resilience to atherosclerosis. In other words, they are trying to understand why some people have no risk factors but develop arterial damage and heart attacks, while others have risk factors but no heart disease.

You can support this important research by making a tax deductible donation today and help our researchers in their quest to make medical breakthroughs happen.