Patients with no risk factors almost 50 per cent more likely to die from a heart attack.

Professor Gemma Figtree has recently found through her research that patients who had no traditional cardiovascular risk factors were almost 50 per cent more likely to die 30 days after a heart attack than people with these traditional risk factors.

The impact was even worse for women.

The SWEDEHEART study, recently published in the Lancet, showed those who suffer a heart attack without risk factors, which makes up around 15% of the study population, are at high risk of mortality, and that this may be partially attributable to them receiving less early evidence-based treatment post heart attack.

Professor Figtree explains “we coined the term SMuRF-less to refer to that group of patients with life-threatening myocardial infarctions (MI, colloquially known as heart attack) and advanced atherosclerosis who have no prior symptoms, and no Standard Modifiable cardiovascular Risk Factors (SMuRFs), which include high cholesterol, high blood pressure, smoking, obesity, lack of physical activity, other conditions such as diabetes and of course, family history”.

“Coining the term SMuRF-less has helped give this group of patients an identity to raise awareness of the unique challenges and encourage focussed research efforts. Given that an estimated 7.2 million people around the world die from coronary heart disease [1]each year, the findings have substantial public health implications”. Professor Figtree said. 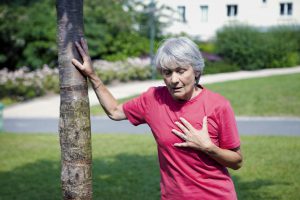 Women with no SMuRFs have the highest chance of dying from their heart attack, with 18% dying at 30 days. This mortality rate is 3 times that of men with at least one risk factor (6 %).

Professor Figtree’s BioHeart project came to fruition when, as a practicing cardiologist, she saw the increase of patients presenting to Royal North Shore hospital requiring a stent with none of the traditional modifiable risk factors, rising from 11% to 27% in the last decade.  Seeing patients increasingly having a heart attack without warning and saying “Why me?” prompted Professor Figtree to embark on this project on receiving initial funding from Heart Research Australia.

“Patients ask “why me” because they are coming to the hospital with no known risk factors and often have healthy lifestyles, yet they are found to have serious heart disease” said study co-author, Cardiologist, Dr Steve Vernon, (funded by Heart Research Australia as an early career researcher).

The BioHeart project has grown significantly over the years since the initial funding Heart Research Australia provided.  The SWEDEHEART study is the most recent study for the BioHeart project and was a collaboration between Sweden and Australia, looking at 62,048 patients over a period of 13 years.

The SWEDEHEART study included an examination of both typical and less typical risk factors including body mass index (BMI), triglyceride and HDL (cholesterol) concentrations in the SMuRF-less group. The study suggests that these risk factors are not accountable for the “unexplained” progression of atherosclerosis leading to heart disease and heart attack, strongly supporting the hypothesis that there are basic biological differences in susceptibility which need further research.

Professor Figtree says “The biology that drives the susceptibility to heart disease in these individuals may actually unlock all sorts of information that helps us better understand the rest of the population at risk of heart disease.”

Significantly, the study found lower rates of evidence-based medical therapy at discharge in SMuRF-less patients, particularly women, with only 69% receiving ACEi/ARB and 85% receiving a beta blocker compared with their SMuRF female counterparts who had at least 1 risk factor (78% and 90% respectively), with some evidence that suboptimal secondary prevention at least partially contributed to increased mortality. Evidence-based medical therapy was more closely aligned with current best practice in males but remained significantly lower in SMuRF-less males compared with those with at least 1 risk factor.

There is an unfortunate preconception within the community that coronary artery disease is all solved, and is predominantly self-induced by individuals failing to adequately manage their modifiable risk factors.  The results from this study counteract this myth and put a spotlight on the need to continue to invest into research which aims to understand and identify more risk indicators to highlight individuals at risk for atherosclerosis many years before they present with their first heart attack.

Being able to understand and identify these biomarkers will ultimately help medical professionals create a management or treatment plan to help reduce the devastating impact heart attacks can have on families and the community.

Heart Research Australia funds first stage research to enable early career researchers, like Professor Gemma Figtree when we first funded her, to achieve initial solid results to then apply for larger government grants to significantly magnify the impact of their project.

Thanks to the initial ‘seed’ funding provided to Professor Figtree from Heart Research Australia, the BioHeart project continues to delve into the missing biology of coronary artery disease focusing on being able to ultimately identify potential risks for patients before they present with a heart attack. Professor Figtree and a team of national and international experts have recently been awarded an NHMRC Centre of Research Excellence to develop new approaches to improve outcomes in patients with coronary artery disease.

You can read more and see Professor Gemma Figtree speak to the ABC about the SWEDEHEART study below or to read the full publication click here. 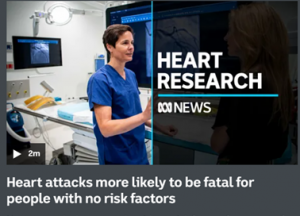