“I look at the alternative options that were available had I not accessed Helge’s treatment, and it looked fairly grim. ” 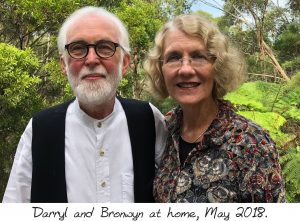 Helge was the cardiologist on duty when Darryl Lock, a fit and healthy 75-year-old, was admitted to Royal North Shore Hospital suffering from a heart attack in 2016.

At a follow up appointment, Darryl’s wife Bronwyn asked Helge what the outlook was for Darryl’s heart health. “Helge said there was quite a lot of damage. I was shocked – I was asking if Darryl would recover with no consequences and Helge wouldn’t say.”

Six months after his heart attack, Darryl began to develop heart failure due to the muscle damage cause by the heart attack. His symptoms began to worsen over a few days as his breathing became more and more laboured, and Bronwyn could hear his lungs rattling when he was lying down. Their GP told them if it got any worse they should call an ambulance, which they did late one night.

It wasn’t until they got to the hospital that Bronwyn realised how bad it was. “He was hooked up to machines and had so many people standing around him. He looked terrible, he was so white, and he just looked like death,” Bronwyn recalls.

X-Rays of Darryl’s chest were taken and showed that his lungs were full of fluid, which is a symptom from heart failure. Darryl was started on conventional treatments and was monitored in intensive care for the next 24 hours.

Unfortunately his condition did not improve which prompted Helge to give Darryl an ‘off-label’ prescription for the Beta-3 AR agonist, which had been researching over the last few years.

Darryl’s response to the Beta-3 AR agonist treatment was incredible!

Within a day or so, Darryl was breathing on his own and was no longer gravely ill. Below are the images of Darryl’s X-Rays.

The first was taken when he was admitted to hospital – the white cloudy area, or “cotton wool”, on the X-Ray is the fluid that was in Darryl’s lungs. The second X-Ray, taken 24 hours later, looked worse, despite the conventional heart failure treatment Darryl was receiving.

The third X-Ray was taken just five days after Helge prescribed Darryl the Beta-3 AR agonist treatment, and as one can see, the fluid in Darryl’s lungs had cleared and his heart failure symptoms were quickly diminishing.

Darryl was discharged after 12 days in hospital, and now, nearly two years later, is doing remarkably well given how dire his prognosis was at the time.

He reflects, “I look at the alternative options that were available, had I not accessed the treatment, and it looked fairly grim. And the level of health that I’m enjoying now, to the point where I’m feeling pretty normal, is a fantastic result as far as I’m concerned!”

You can help us save more lives like Darryl’s, by making a tax-deductible gift before 30 June to give our researchers the funding they need to continue their research that has the incredible potential to save thousands of lives.

And while we may be on the verge of a breakthrough, we are not there yet.

The fact remains that this initial kind of first-stage research does not attract government funding, and we must find other ways to fund it.

Please consider making a generous tax-deductible donation to support research projects that have the incredible potential to save lives.

Every dollar makes a difference, so please give generously.