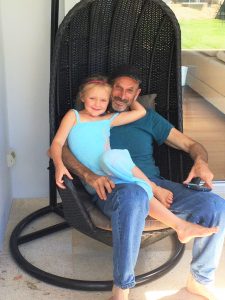 In 2016,Cary, a 63-year-old grandfather of two, was driving home from a client’s office when he felt a strange dizziness. With the dizziness worsening as he arrived home, he called his wife to arrange for someone else to collect their granddaughter from school, as he was feeling too unwell.

Cary’s wife called an ambulance which arrived quickly and the ambulance officers conducted an ECG which suggested Cary was having a heart attack. As the ambulance rushed Cary to Royal North Shore Hospital, Cary was experiencing ventricular fibrillation – a short circuiting of the heart. The ambulance officers used a defibrillator to try and shock Cary’s heart back to a normal rhythm, but he continued to have recurrent cardiac arrests.

Dr Ravinay Bhindi, was notified of Cary’s impending arrival at the hospital and condition via the ETAMI (Early Triage of Acute Myocardial Infarction) ECG service, and through the data he received, prepared the catheter laboratory for Cary’s arrival, as well as a cardiac surgery team on standby.

Dr Bhindi decided to go ahead with the stent insertion procedure on Cary’s arrival, despite the fact Cary had first collapsed over 40 minutes ago and his chances of survival were shrinking by the minute. Thankfully, the stent, as well as a special balloon pump, were able to unblock Cary’s artery and his heart was shocked back into a normal rhythm.

Cary told us, “I feel a guardian angel has been looking after me. If there had been one hitch along the way, I wouldn’t be here.”

Cary is incredibly grateful to the amazing ambulance officers and doctors who treated him, but believes he is alive to share his story because he received an ECG in the ambulance, allowing him to bypass triage in the emergency department and go straight to the catheter laboratory for treatment.

Through the generosity of wonderful donors, Heart Research Australia funded the trial that lead to ECG machines being installed in ambulances in the 1990’s. We also funded the SALAMI (Stents as an Alternative to Lytic therapy in Acute Myocardial Infarction) study that lead to patients like Cary being treated through the insertion of a stent, rather than being administered slow-acting drugs to unblock their coronary arteries.

“I wouldn’t be here if it weren’t for the machine in the ambulance funded by you…My grandkids are the real benefactors of your work as they will have their grandfather around for years to come” says Cary.

Cary says he cannot speak highly enough of the care he received. He was particularly moved when one of his cardiologists came to visit him one evening and said “I’ve had a really hard day. You are our good news story and we all talk about your remarkable survival. I came to see you for myself to feel good about life.”

Cary feels very strongly that he mustn’t waste his second chance at life – that he has to be worthy of the precious gift that he has been lucky enough to receive.